Wearing masks on public transportation has been mandated, but due to quarrels resulting from the failure to wear masks and abusive language and violence that have been targeted at station employees, the Seoul Metropolitan Government will enforce special countermeasures to prevent conflict among citizens and establish a culture in which masks are worn.

The SMG will add the report function to the “Ddota (Ride Again) urban railway” app starting August 3 (Mon.) that will allow users to report passengers who are not wearing masks on the subway.

Once a passenger not wearing a mask is reported, the passenger’s location will be tracked and subway security officers will immediately be dispatched to take action. Passengers who fail to comply with the instructions or attack the security officers will be charged with a fine as part of the city’s plan to respond firmly to such passengers.

The SMG will also hold an extensive campaign for one month starting on the 27th to help citizens fully recognize and understand the “restricted boarding on subways and buses for passengers not wearing masks.” Publicity activities will be held at transfer stations and main bus stops with heavy floating populations, and videos on subways and subway station buildings, bus TVs, and bus information terminals (BIT) are expected to promote “mandatory mask wearing.”

The speed dial number to “report passengers not wearing masks” will be added to the call center options for citizens’ convenience starting on the 27th (Mon.). The call center numbers for the subway lines are ▴

Failure to follow the instructions of the subway security officers may result in a fine in accordance with the “Railroad Safety Act.” Strong measures will be taken against any violent actions that target station employees or subway security offers in relation to the refusal to wear a mask. 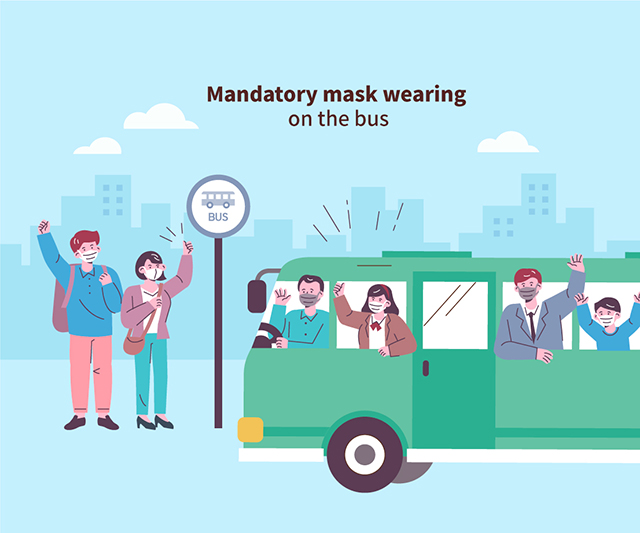 The campaign for mandated mask wearing on the bus Monday morning during rush hour will be held for one month (July 27-August 24) starting on the 27th.

About 2,400 individuals of the SMG and the Association of Bus Transportation, 65 city bus companies, and 139 village buses will take part in the campaign. The campaign will mainly take place at 87 main bus stops with high floating populations.