The city of Seoul announced that it will be adopting a “New Pedestrian-friendly Strategy” to reverse the old formula for designing and establishing roads and transportation of the industrial generation in which first, space for roadways was secured and then, sidewalks were constructed once space became available. The city will now prioritize pedestrians and bikes, and then eco-friendly vehicles for the future such as shared cars and electric wheelchairs, followed by parking lanes and parks, and lastly space for roadways.

On July 14 (Sun.) at 2 p.m. (local time), Seoul’s Mayor Park Won-soon, who is currently on a tour of Central and South America, visited Ciclovia in Bogota, Colombia, the world’s largest car-free zone that has been in operation since 1982. He declared the “Human-focused Bike Revolution” for Seoul and said he will establish bicycle highways (Cycle Rapid Transportation, CRT) stretching in all directions of Seoul.

The construction of CRT through revolutionary spatial usage is an idea that involves installing bike-only lanes where bikes can be ridden safely, quickly, and comfortably in a space that is separated from the roadway.

If existing bike lanes, partial areas beside the roadway, are judged to be unstable, the biggest difference of CRT is that it will be a bike-only zone that is physically separate from pedestrians and cars.

In line with Seoul’s philosophy of transportation, the “people-focused street,” and the characteristics of the city’s structures, various types of CRT will be pursued, including a canopy-type CRT that can be built through the innovative use of the surface structures and overpasses, a tube-type CRT, a green carpet-type CRT that can function as green spaces in urban areas, and more. 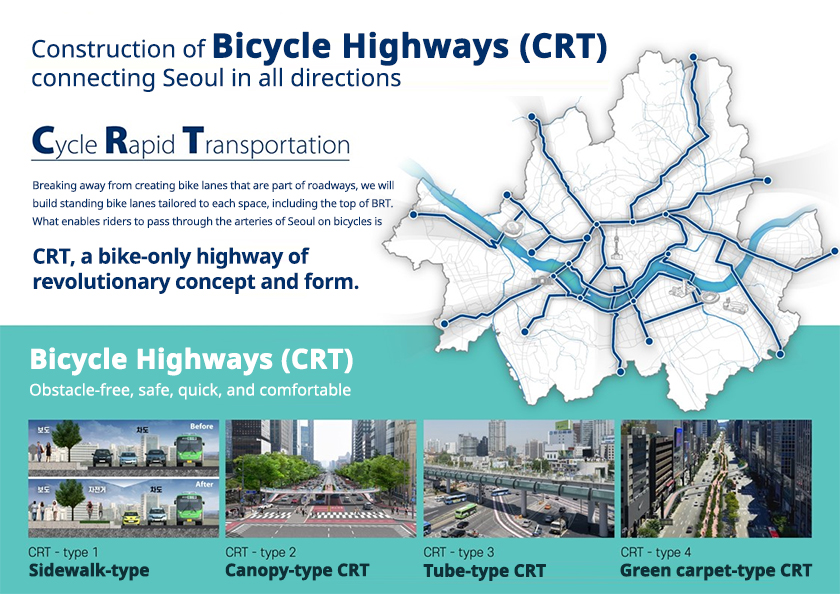 The bike lanes that had the same height as the roadways will now be physically separated from the roadway to secure a safe and comfortable space for bicycle riders. Themed bike lane networks will be established using the bridges over the Hangang River and special bike zones will be built in five different spheres of life. In association with various development projects, a total of 72 km of bike lanes will be established (over 40% bike lane ratio) and a large number of Ttareungyi rental stations will be installed to facilitate the use of bikes between residential zones, office zones, and subway stations.

Ttareungyi has become a widely used mode of transportation, as its rental number has reached over 22.35 million over the past four years following its launch. Its services will be ameliorated in preparation for 2020, the year in which 40,000 Ttareungyi will be in service. 1,000 electronic Ttareungyi will be introduced for residents who live in hilly areas. The connection with public transportation will be reinforced through the construction of large-scale Ttareungyi stations near the subway stations that demonstrate a great demand for bikes.

Additionally, car-free streets will be expanded. If a car-free street was operated on a roadway in the form of “lines,” it will now be operated in the form of “surfaces” under the title of “Car-free Zone” in areas such as Itaewon’s special tourist area and Namdaemun Market in which there is a high population of pedestrians including tourists and shoppers.

Mayor Park Won-soon said, “Over the past eight years, Seoul’s policy has been centered around people. We will now employ the New Pedestrian-friendly Strategy to reorganize Seoul’s traffic system to be centered around pedestrians, bicycles, and public transportation under the principle, ‘The right of mobility is a basic, civil right.’ This will be done in order to improve transportation, which is just as important as food, clothing, and shelter for our residents’ lives… Focusing on the CRT that runs in all directions throughout the city, we will lead the bike revolution for each and every one of our citizens. We will make Seoul an exemplary model as a haven for bike riders, a city in which people feel comfortable, and a sustainable city to reduce particulate matter and tackle climate change.”